The Educational Journal of the 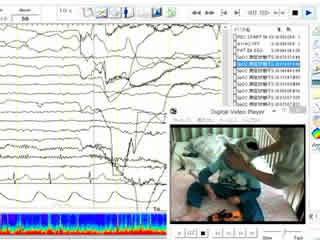 Ictal video-EEG recording. The first and second video sequences show that after his mother rubbed his entire face with a towel, the patient fell down from a sitting position and unresponsively stared upwards for around 10 seconds; his consciousness then recovered abruptly. Simultaneous ictal EEG shows that, immediately after the rubbing, 3-Hz generalized spike-wave complex discharges appeared and lasted during unresponsive staring, during which time the frequency of spike-wave discharges slowed gradually to 2.5 Hz. Slow waves of 4 Hz subsequently became predominant in the bilateral frontal areas for around 10 seconds. In the second video sequence, the suppressed respiration appeared for around 3 seconds after the start of 3-Hz generalized spike-wave complex discharges.