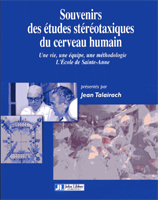 A book written in French
The pioneering works of Jean Talairach, Pierre Tournoux, Gabor Szikla and their team of doctors, technicians and nurses, followed by those of their students who in turn have become masters, sponsors and inventors of new applications for the technique, have given rise to the stereotaxic method and its neurosurgical applications at the École de Sainte-Anne.
Looking back to its inception in the 1940s when it appeared like an impossible dream, this book retraces the history of "stereotaxy" a method involving the insertion of electrodes into the human brain, without the risks outweighing the benefits, to try to decode our "black box" and be able to treat certain disorders, particularly epilepsy.
Using chronologically assembled and commented photos, Jean Talairach recounts with feeling the early days of stereotaxic neurosurgery, the life of the team that gradually gathered around him, the working atmosphere and the various stages in his research. He shares with us his memories of this scientific adventure, the vibrant personalities encountered and the pioneering researchers involved, neurosurgeons, neurologists, anatomists and psychiatrists, with whom he created the Ecole de Sainte-Anne.
Bertrand Devaux's brilliant postface recounts the major milestones on the road to development of this method with the rise of cerebral imaging and tumour surgery, and ends by conjuring up the potential role of stereotaxy tomorrow on the basis of its past and present uses.
For all those who are familiar with and were involved in this research programme, this book is an emotional and even nostalgic record; younger readers will discover the courage, passionate energy and dedication that led to these discoveries and their neurosurgical applications today.
CONTENTS:
Stereotaxic instrumental and anatomical-pathological research
1942: Creation of team by neurosurgeon M. David and start of stereotaxy
1943: Stereotaxic instrumental research commences
1947–1993: Stages in anatomical-radiological research
The first stereotaxic therapeutic procedure – The Hôpital Sainte-Anne –
1948: The first stereotaxic procedure
1950: The Hôpital Sainte-Anne
1958 Prof. M. David's department
Recognition at last – Drama – A "false competition"
1955–1960: Recognition at last
1960: Drama
1960: A "false competition"
Neurosurgery department B
The buildings
1964
1965
1966